Within the Black lives matter movement lies a sub-category of black artists who have been suffering from discrimination and under-representation for years. The BLM movement also sheds light on African artists, but sometimes, albeit their good intentions, museums create more damage.

The web is in turmoil over what is defined as fraud and exploitation of black artists by the Whitney Museum in New York.

The museum canceled an exhibition that was scheduled to open in mid-September, showing activist art created during the Corona period. A number of works by black artists chosen for the exhibition, were recently purchased by the Whitney from charity auctions – a very specific type of auction, in which the works are donated by the artists or consigned for a nominal price, which is significantly lower than the market price of those artists. In this case, these include artists who donated work for $ 100 with the notion that the works would be sold to people who could not afford to pay high prices. It was impossible to imagine that a museum like Whitney would take advantage of this type of sale to purchase works cheaply. 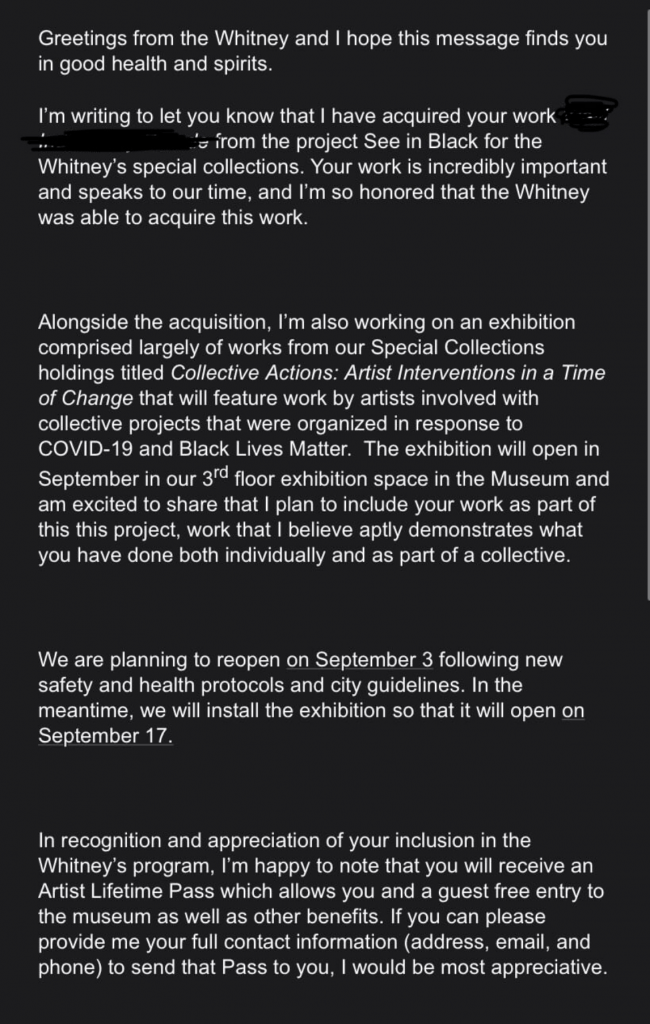 The uproar that arose on the web after artists received notifications from the Whitney that their works had been purchased and included (without obtaining permission) in the exhibition, caused the cancellation and flooded the issue of exploitation of artists by museums. In this case it happens to be black artists, at a time when sensitivity to vulnerable groups is at its peak, but the phenomenon can include artists of all colors and genders.

A museum is expected to protect artists and not exploit them. Acquisition budgets usually go to the artists themselves, when it comes to purchases from live artists. This is the museum’s way of supporting them. In this case, the artists in question received letters from the museum and all they were offered were memberships of honor – which is, by and large, free admission.

The museum could have chosen other options besides canceling the exhibition – one is to pay the artists the market price for purchased works and the other is to donate the proceeds from the exhibition to the participating artists, who all, regardless of color, struggle during the Corona period.

Although the art world revolves around the artist and the works of art, which is the raison d’être of this multi-participant ecosystem, the commercial arena of art often neglects the artist himself. As in the story described above but mainly in everything related to sales in what is called the “secondary market”. This term refers to works of art that are re-sold.

The first time a work is sold – either through a gallery, an agent or directly from the artist – he will be paid for it. But when the buyer chooses to re-sell the work, the artist is out of the picture.

The controversial collector / dealer, Stefan Simchowitz, known for his manipulative moves, purchased the painting “The Lemon Swimsuit” shortly after Boafo finished painting it. This was only eight months before the sale and then he did what earned him a bad name – a move known as flipping – when a collector buys a work by a novice artist and sells it quickly and profitably.

Obviously, this practice is not only typical of artists of a certain race but as mentioned, the sensitivity today towards artists of color is at its peak. On another recent occasion, Christie’s showed politically correct sensitivity in an unusual virtual exhibition / sale of 22 young black artists. What was innovative about this sale, which ended in mid-August (its results were not released), was the move initiated by its curator, perhaps in response to the Boafu story. In this sale, Christie’s wavered its commission, giving each artist 100 percent of the proceeds from the sale of their work.

And not only that – every buyer was obliged to sign a contract with extensive terms, among which were limitations on future sales of the purchased works for at least five years. If they do want to sell, they must give the artist a right of first refusal and if they sell to someone else, they must give 15 percent of the profit to the artists.

It will be interesting to see if this innovative initiative seeps into the general category of contemporary sales. I guess it arouses a lot of opposition among collectors who do not want to be bound by agreements after investing their best money in purchasing a work of art. The deeper problem is the ability to manipulate and rake in such a large profit in such a short time.

The brief history of this practice shows that what goes up fast also comes down fast, as we have seen in the past with artists like Oscar Murillo and Lucian Smith who were the rising stars of 2013-4 and since then their star has faded.

This website uses cookies to improve your experience while you navigate through the website. Out of these cookies, the cookies that are categorized as necessary are stored on your browser as they are essential for the working of basic functionalities of the website. We also use third-party cookies that help us analyze and understand how you use this website. These cookies will be stored in your browser only with your consent. You also have the option to opt-out of these cookies. But opting out of some of these cookies may have an effect on your browsing experience.
Necessary Always Enabled
Necessary cookies are absolutely essential for the website to function properly. This category only includes cookies that ensures basic functionalities and security features of the website. These cookies do not store any personal information.
Non-necessary
Any cookies that may not be particularly necessary for the website to function and is used specifically to collect user personal data via analytics, ads, other embedded contents are termed as non-necessary cookies. It is mandatory to procure user consent prior to running these cookies on your website.
SAVE & ACCEPT
גופנים
ניגודיות וצבעוניות
Accessibility by WAH